The Spread of Coronavirus in the Realm of Higher Education

Coronaviruses were first identified in the 1960s. They get their name from their crown-like shape. The symptoms of most coronaviruses are like any other upper respiratory infection, including runny nose, coughing, sore throat, and sometimes a fever. There is no vaccine for coronavirus. To help prevent a coronavirus infection or to treat it, do the same things you’d do to avoid the common cold.

On January 30, 2020, the International Health Regulations Emergency Committee of the World Health Organization declared the outbreak a “public health emergency of international concern.” As the death toll from the pneumonialike illness rose and cases were found in neighbouring Asian countries, including South Korea and Singapore, as well as in the U.S., the economic impact of the novel coronavirus became widespread. As warned by the sector leaders, the deadly coronavirus outbreak had a major impact on international student mobility, after thousands of learners were left stranded in China.

Australia, New Zealand, the US and Singapore were among countries that had banned entry to foreigners travelling from China from the very beginning of the outbreak, while Japan and South Korea were denying entry to travellers from Hubei province, the centre of the outbreak. Meanwhile, British Airways suspended all flights between the UK and mainland China.

The decision to extend the shutdown of higher education throughout China until next month is expected to be a clear signal to other parts of the country’s education system to prolong the winter break, which started in December and includes the lunar new year, until the virus is under control.

According to the stats published in an article in ‘The Conversation’, there were more than 100,000 students stuck in China who had intended to study in Australia this year. As each day passed, it became more unlikely for them to arrive in time for the start of the academic year. For universities that have come to rely on China, the coronavirus poses an unprecedented risk.

This crisis hit hard for many Chinese students, an integral component of their campus communities. It not only caused disruptions to their study, accommodation, part-time employment and life plans but also their mental well-being. A statement released by the British Council explained that education activities in China in February are cancelled and advised against UK institutions travelling to China for an education-related activity next month.

Inside HigherEd published, ‘Australia never experienced such a sudden drop in student numbers. The reduced enrolments had profound impacts on class sizes and the teaching workforce, particularly at the master’s level in universities with the highest proportions of students from China. Tourism, accommodation providers, restaurants and retailers who cater to international students hit hard too.’

Some institutions delayed the start of its semester by at least one week and will now conduct all the following week’s classes online. The orientation activities have been postponed, along with about 850 exams. Education companies have additionally reported cancellations from Chinese clients and expressed worries that the disease will have a similar impact on the industry as the SARs outbreak in 2003.

Meanwhile, governments have been making plans to help citizens in the worst-hit areas. China appears to be fighting an increasingly uphill battle to contain the coronavirus outbreak, as new deaths and infections continue to climb — prompting an ominous warning from the World Health Organization.

China has taken unprecedented actions to try to contain the virus, shutting down transportation in and out of many cities, closing major attractions like Disneyland in Shanghai, and postponing the start of school, among other precautions.

According to the statistics released on Monday earlier this week, the deadly virus has claimed over 1,000 lives and stricken more than 40,000 around the world, officially topping the casualties of the deadly severe acute respiratory syndrome (SARS) outbreak of 2002. Meanwhile, the list of businesses that are curtailing travel and shutting down operations in the world’s second-largest economy is lengthening. (Image source- Google)

Ranging from a minimal impact to a severe one, depending upon the timeline of the scenario for return to normal business activities. A baseline end of the outbreak by the end of March can have a moderate effect on the Higher education sector, causing delays in applications and cancellation of summer programs. Whereas, if the timeline lengthens till the end of August, there’s a chance of significant disruption impacting the overall mobility and notable impact on the sector, implying, the longer the Coronavirus crisis persists, the bigger the impact looks like. 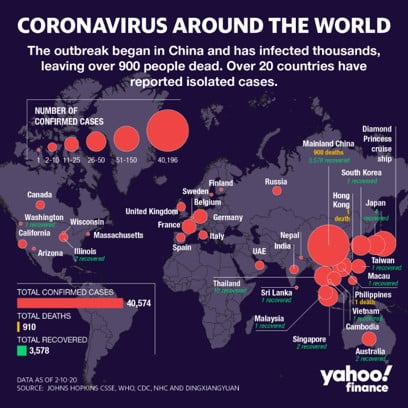